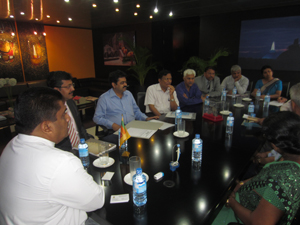 A group of High Level Officers of Indian Government who were visiting Sri Lanka met Acting Minister of Housing.  The delegation who met Hon. Lasantha Alagiyawanna, the Acting Minister of Construction, Engineering Services Housing & Common Amenities at the Ministry declared that in construction of Housing in India, which is the nearest country to Sri Lanka, a permanent house of 450 Square feet in extent could be constructed for IRs.4 lakhs.

They further pointed out that they could obtain a clear understanding on the process of ICTAD which is under the Ministry of Housing & Construction and there is a procedure of registration of contractors in India as well as in Sri Lanka. Indian delegation expressed willingness to hold special discussions with the officers of the Line Agencies of the Ministry such as State Engineering Corporation, National Housing Development Authority, ICTAD & Urban Settlement Development Authority for further strengthening of the process of construction of Housing which is implemented presently in Sri Lanka under the guidance of His Excellency the President Hon. Mahinda Rajapaksha. The Purpose of these meetings is to discuss matters of Constructions of Housing development / Training / Housing development & research etc. of both countries. Acting Minister pointed emphasized that the need of awareness creation on technology and procedures in the field of construction is fulfilled through it.