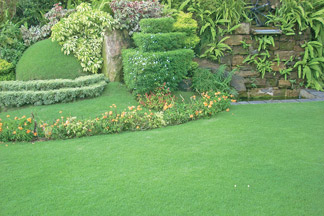 Owning a beautifully landscaped garden would be anybody’s dream. In laying out the lawn, do you know the amount of effort that goes into preparing it?

If anybody has seen how people are engaged in the turf sod cutting job at places such as Avissawella and Pelmadulla in the Sabaragamuwa Province or at Padukka, Hanwella and Waga, he would definitely say that it was not only a hard-earned job, but also a risky job.

The Sunday Observer last week visited a number of villages at Padukka, Hanwella, Avissawella, and Ratnapura area to meet people whose livelihood is the sod cutting job. Not only elderly people, but also children are engaged in the job. Some have been engaged in traditional turf cutting for the past forty years.

The grass is grown in deep slopes. People cut the turf sods in a systematic way and carry them on shoulders to the main road after passing a distant of nearly two kilometres.

A prominent worker who has been engaged in the turf cutting job, 54-year-old, P.L. Gunapala of Kuruwita, Ratnapura said he took over the business after his father’s demise in 1970.

He said his grandfather started the turf cutting job in the 1920s and his father took over the business thereafter.

“My income is about Rs. 1,500 a day and I sell the stuff to buyers coming from Colombo”, he said. 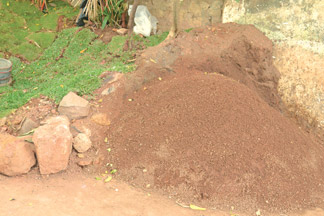 The turf sod cutting business has been the livelihood of over 20 families in the Kudagama in Avissawella.

The business was carried out profitably at Kudagama even during the colonial era when British rulers were in the country.

The book titled ‘The Art of Landscaping’, says that a British Governor, John Moore had visited a village in Pelmadulla, Ratnapura during the early part of 1930s in search of gem mines. During his short stay in the village he spotted a rare variety of beautiful green grass which he had first seen in the lawn of the Buckingham Palace.

He himself cut two sods and replanted them at his official residence in Cinnamon Gardens, Colombo 7. At that moment the garden was full of cinnamon trees and no grass were seen. The green grass which he brought from Pelmadulla was grown in the lawn.

This rare variety which is very expensive even today is called as ‘Australian grass’. 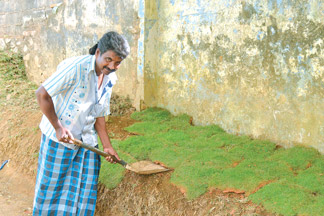 He said a group of Australian citizens had visited Lellopitiya, Ratnapura to buy gems during 1920s.

They were living in a house at Lellopitiya for several weeks. As the lawn of their garden was full of weeds they had brought this variety from their hometown, Sydney. Thereafter people called the variety as `Australian grass’. 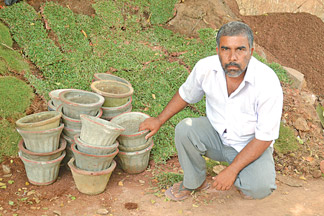 The variety is thin and short. It needs little fertiliser to grow and also water everyday, but does not grow fast such as other varieties.

Unlike other varieties, the leaves of Australian and the Malaysian varieties give a fresh look even at dusk. The Australian grass also needs a cold climate.

Our visit to Meepe, Padukka was unforgettable. About fifteen families in the village are engaged in the sod cutting job. We visited a lonely three-acre land to watch the art of cutting grass sods. A group of six men and a child were engaged in the business at that time. They were under the impression that we were sent by the Environmental Ministry to check whether they were destroying the environment by cutting sods of turf, which made them reluctant to face us.

But fortunately later they came to give details of their industry for a newspaper article.

According to 47-year old M.L. Suranimala, sod-cutting was the livelihood of at least fifteen families in the village.

“There are lots of State owned lands in our area. We cut sods of turf which are on bare lands and on mountain slopes”, he said.

He said buyers from Colombo and suburban towns visit their village two days a week to purchase the turf sods.

We have also grown Australian grass in several lands owned by individuals and we have to keep a close tab on this variety until they grow up.

A businessman, Dayasiri Peris of Moratuwa said he has been involved in the industry for the past twenty years and gets a monthly income of Rs. 80,000. 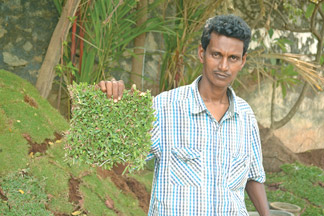 He said he visits sod cutting places at Hanwella and Avissawella twice a week and brings a lorry load of turf sod.

“I have a business place in a by-road at Bauddhaloka Mawatha, Borella and in addition I provide turf sods to hotels in Colombo and also to bungalows. I also take orders to lay turf sods in home gardens,”he said.

He said unlike earlier, there is no improvement in our business due to the arrival of synthetic grass to the country.

He lamented over the laying of imported synthetic grass in some bungalows in Colombo and also in some playgrounds.

He therefore appealed to Government authorities to refrain from importing synthetic grass to the country as it will badly affect the economy as well as the environment.

A long-standing turf sod seller, Sirisena Amarapala said, earlier about 25 families in Colombo did the turf sod selling business along the Bauddhaloka Mawatha, oppopsite the D.S. Senanayaka Vidyalaya, but due to objections from the Colombo MMC and the Police all of them had to leave their traditional business premises.

He said due to this, only about five families are engaged in the business along Ashroff Mawatha and unlike earlier, their business has gone down. He appealed to the authorities to allow them to start their turf sod selling business along the Bauddhaloka Mawatha once again, as it was one business that will never pollute the environment.