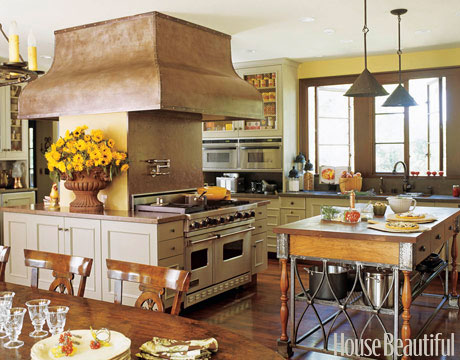 A 4-by-4-foot chase — a column holding all sorts of electrical wiring and plumbing — runs right through the room and could not be moved. So designer Sandra Bird worked around it, and built it out into four areas: a cooking area with the range, a buffet for the table, a desk, and then a baking area in back. 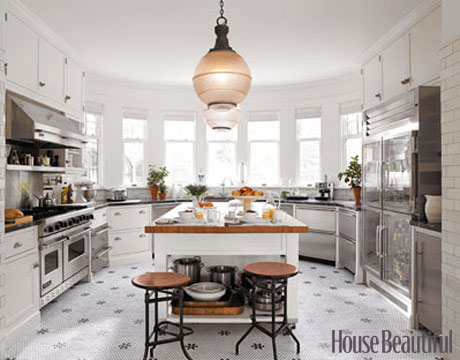 Though a “pass-through” refrigerator is the kitchen’s quiet star, the marble countertops and twin 19th-century light fixtures are also understatedly electric. Kitchen of the year designed by Joan Schindler. 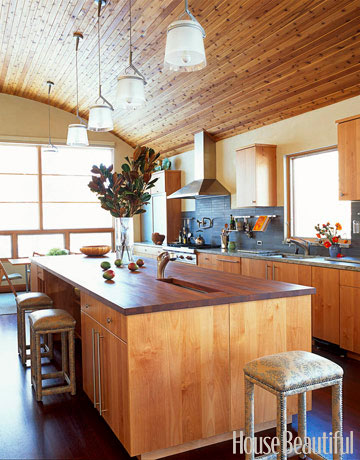 This sunny, modern Aspen kitchen designed by Ann Wolf is a showcase for beautiful materials and a blend of wood tones. The island countertop is iroko wood, with remaining countertops in a granite called Verde Eucalyptus. 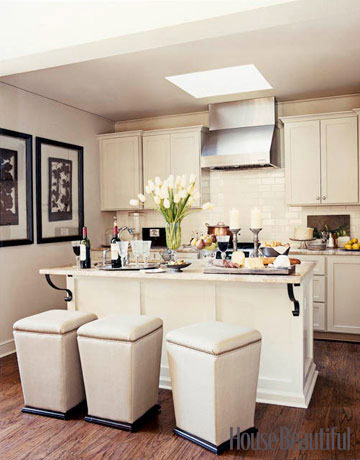 Susan Ferrier designed the kitchen in this tranquil Alabama townhouse. “You don’t want the eye to stutter in a small space,” Ferrier says. “You want it to move naturally from one thing to the next, from similar color to similar color, from shape to shape.” 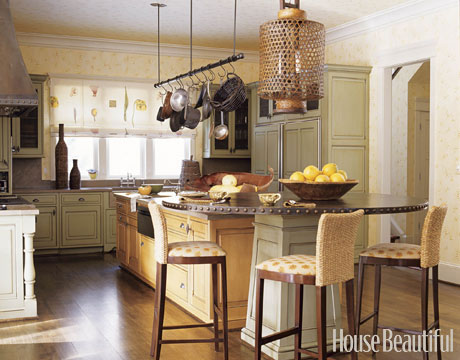 Designer Barry Dixon hung an Asian fish trap lantern for this kitchen’s owner, who spent her childhood in Asia. 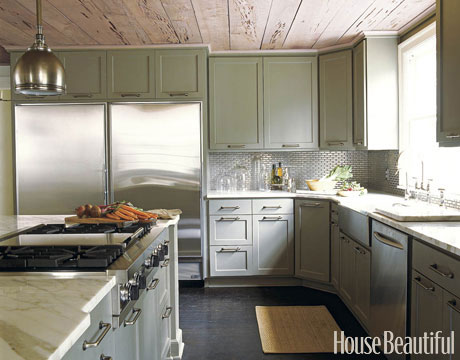 This kitchen design embodies the Belgian penchant for simplification, with its clean-lined gray-green cabinets and untreated pecky cypress ceiling. Designed by Kay Douglass. 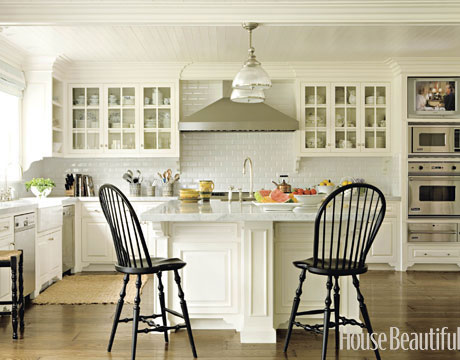 Designer James Radin chose the black Windsor chairs for contrast — “like a punctuation mark” — in the creamy, all-white kitchen. 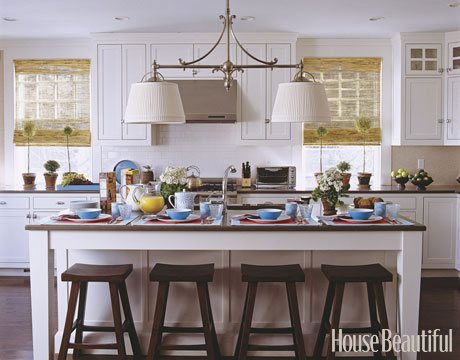 Newport-based architect Steven Laurin designed the island, reminiscent of a farm table except for its top of CaesarStone. Interior designer Meg Braff chose the large double pendant fixture to balance out the large island and warm up the kitchen of this summer home. 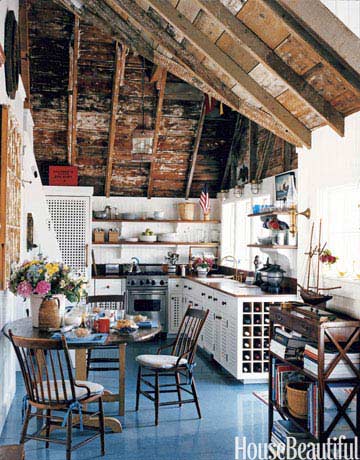 For decorative detail in this Palm Beach kitchen, designer Gary McBournie studied vintage boating posters and old photographs. The wooden grills of the kitchen cabinets were taken from an old photo of a 1920s yacht. 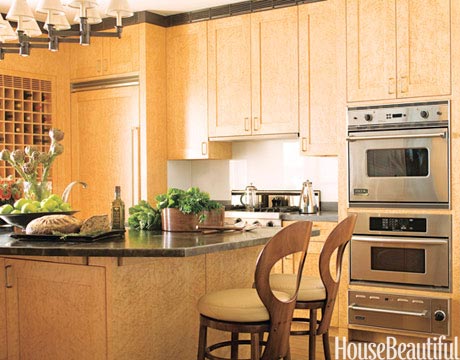 This Manhattan kitchen features anigre-finished cabinetry and zinc countertops—and as little chrome as possible, because designer David Easton prefers the look of brass. 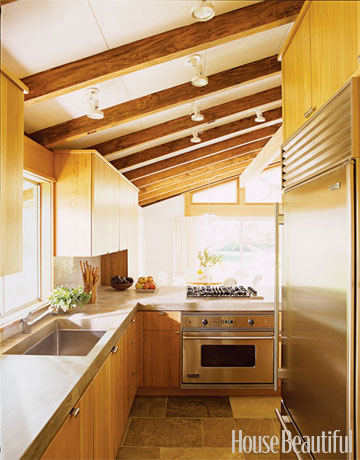 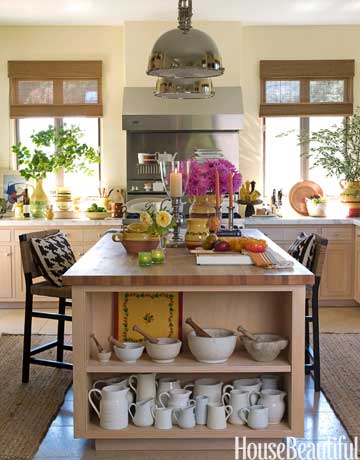 “We sometimes eat dinner just on the island, or use it for a buffet when we entertain. Dave cooks. I do the tabletops and dishes,” says Patrick Wade of co-designer David DeMattei. The pair co-designed their Napa Valley home. 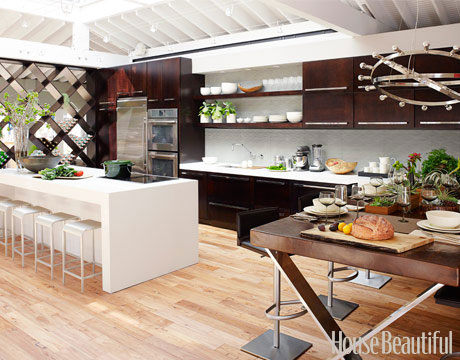 Showcased in New York’s Rockefeller Center, the 2010 Kitchen of the Yeardesign by Jeff Lewis was a perfect blend of contemporary design and rustic warmth. Recognizing that kitchens are no longer just for cooking but for gathering too, Lewis added a reclaimed wood dining table by Jeff Soderbergh, a swank lounge area, and an island with ample seating. 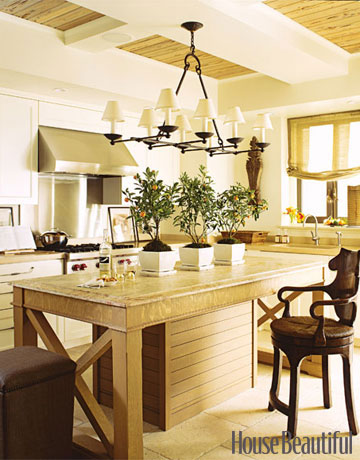 Designer Ray Booth wanted to give the kitchen an aged, casual feeling, with distressed finishes. The ceiling is made from pecky cypress, and the center island is oak treated with ammonia and wire-brushed to pull out the grain.